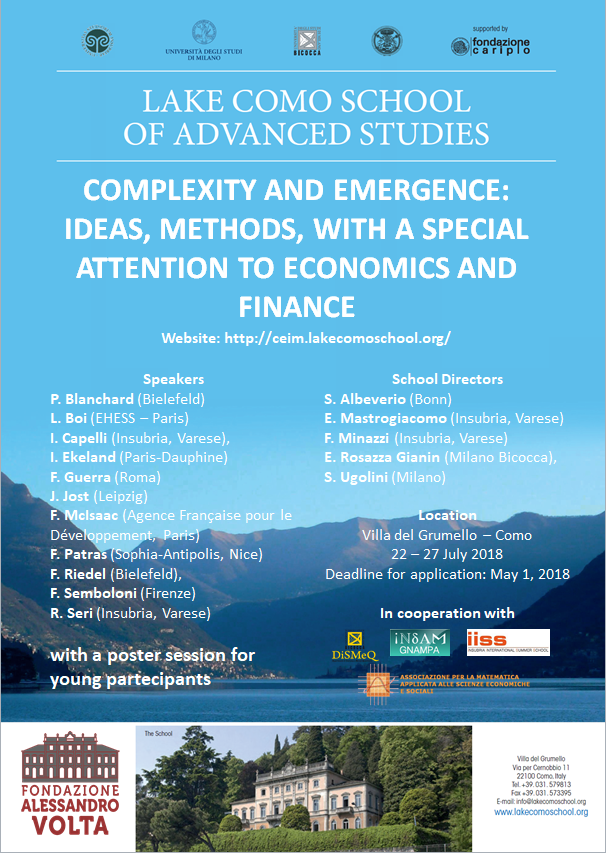 Complex systems comprehend a large number of components and interactions, and cannot practically be reduced to a small number of simple components with well-defined relations. The theory of complex systems has evolved from various areas of research, in particular non linear dynamical systems, general system theory, chaotic system theory and theory of stochastic processes. It is also strongly influenced by network theory, statistical mechanics, computer science (algorithmic complexity), statistical analysis (extreme events, data analysis), control theory. Emergent phenomena, presenting essential qualitative differences from those the single components of complex systems, deserve special interest, and their study (explanation of emergence, prediction) constitutes a major goal in several areas of knowledge. In the study of complex systems and associated simulations, models inspired by theoretical and mathematical physics play an important role, since they often provide well-defined suggestions for the dynamics of the components (micro level) from which the emergent behaviour of the system as a whole (macro level) should be explained. In socio-economical sciences, the interplay between microlevel and macrolevel, and the phenomena of emergence arising from this interplay is much less understood than for certain system described by science of nature. In recent years however agent-based models have been developed in the area of econophysics; these have the potential to relate to models also discussed by economists, for instance in connection with financial markets. Interdisciplinary efforts to better understand the evolution of macroeconomical systems into “singularities” (e.g. during financial crisis) are increasingly required, and methods of the area of complex systems (phase transitions, asymptotics, extreme events, stochastic control) are expected to play an important role. The need to prepare a generation of researchers able to do critical, interdisciplinary work and possibly develop new synergies between different communities, from mathematics to information sciences and theoretical physics, on one hand, and to socio-economical sciences on the other hand is much felt.
The aim of the School is to provide these researchers useful instruments from the theory of complex systems, both on the theoretical level and the methodological ones, bridging the present disciplinary gap, and profiting from knowledge and insights from several communities. It is our conviction that to achieve progress in understanding socio-economical as well as ecological problems of our complex word such a preparation is needed, together with a critical reconsideration of our basic scientific and economical approach.
The potential participants are primarily master and doctorate students of mathematics, information sciences, theoretical physics, and economics, as well as research workers in those areas, who want to enlarge their spectrum of knowledge towards the area of complexity. Since ideas and methods of the theory of complex systems also apply to other areas (from engineering and architecture to biology and medicine, e.g.) students and research workers from those areas might also profit from the school. Participants will have the possibility to interact directly with leading specialists of the broad area of complex systems.